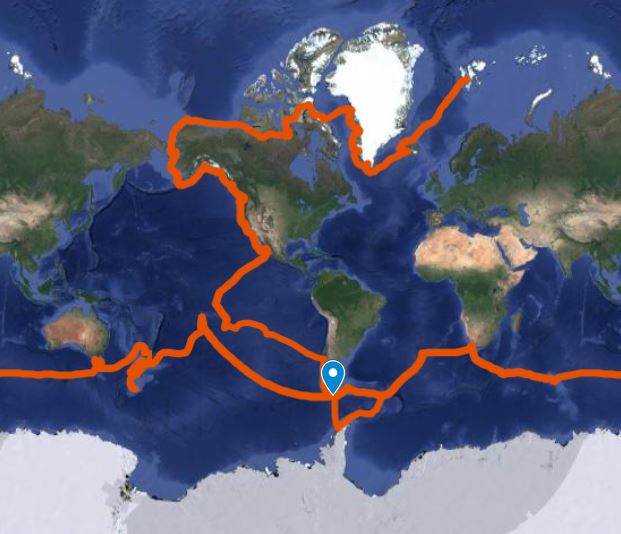 Bahia California, or the Bay of Cortez, turned out to be a great cruising ground. Just that it was getting towards summer there while we were trying to paint the decks. We just could not cope with the heat and needed to sail away. We made a detour into the Pacific on our way to Patagonia in doing so we avoided contrary winds and currents along the South American continent. Apart from the Marquesas we enjoyed Gambier, Pitcairn (of Bounty fame) and Easter Island. Since Puerto Montt in Chile we were in cooler waters again. Down the Patagonian channels all the way to Tierra del Fuego. That was in December 2014. Early 2015 we sailed to Antarctica, passing Cape Horn and crossing the Drake Passage. Infamous waters that gave us the creeps the night before we set off.  The Antarctic Peninsula, it was just fantastic to sail there in our own little boat amongst all the icebergs. Just one trip would not do, there is way too much to take in. So we decided on a Southern Ocean tour for the early 2016 Austral summer. Caro and me sailed from Puerto Williams by way of the Falklands to South Georgia, one of the most unique wildlife places on earth. The abundance, it is just incredible!! Down to the Antarctic Peninsula again for 2 months of ice and more ice. At times a bit more then we bargained for if we were forced out of an anchorage once again! Crossing the Drake Passage back to South America was as it should be, a bit rough at times . . . . .  We sailed in Patagonia and Antarctica until early 2019. We then set off for our private Southern Ocean expedition and  a very slow circumnavigation of Antarctica.

From Puerto William we crossed the Drake Passage for the 21st time to spend another 2 months at the Antarctica Peninsula. We simply can't get enough off it's stunning beauty and wildlife. From there we continued our journey to Cape Town, South Africa and stopped at these tiny specs in your atlas like the South Orkney Islands and Tristan da Cuhna.  A crossing remembered by all the different kinds of Albatrosses we saw along the way. We did a major refit on Jonathan in preparation for our next legs in the infamous southern Indian Ocean and set sail from Simonstown for the Kerguelen Islands. A broken rigging screw got us permission to anchor in the Crozet Islands, Baie du Navire where Tilman anchored when exploring the island. But on to Kerguelen for we were to take scientists to remote locations for their survey. After a well deserved rest in Baie du Morbihan sailed to Port-Aux-Francais, the Research base of the French Southern and Antarctic Territories (TAAF). We met with the two ornithologists that would join "Jonathan" for their scientific survey and annual counting of bird colonies. We learned a lot about birds and sea mammals while we sailed in the eastern and southern part of the Kerguelen. The following weeks, we spent a memorable time cruising in the northeast part of the Island. By then it was time to leave  the Kerguelen and set sail for another leg in the Southern Ocean. Setting sail for the 3518Nm to Tasmania and reaching Hobart in March 2020, having been at sea for 3 weeks we were cleared for Covid on arrival. We did some regular maintenance and upgrades. And explored all these beautiful and often very remote anchorages of Tasmania. Along the wild west coast we circumnavigated the island. A winter crossing of the Tasman Sea got us close to the northern tip of New Zealand. We were informed that if we did not slow down we would need to go into a quarantine hotel for 14 days on arrival. So we hove to for more then a day and arrived 15 minutes after the deadline and spent another 2 days at the Opua dock waiting for the Covid test results. Jonathan was hauled out at Whangarei for regular maintenance, a new coat of red paint and had the mast lifted off to reinforce it's deck track. Exploring New Zealand included the remote and spectacular subantarctic islands, down to latitude 52. These subantarctic islands, the Auckland and Campbell  Islands are National Nature Reserve, part of New Zealand World Heritage Area. Although the nesting Albatrosses had not seen anyone for more then a year they would just open their eyes for a minute when we walked past on the overgrown track. Eager to go and visit our families we sailed  on to Raivavae, French Polynesia. It is a very small island where we could cycle around the island in about 3 hours. From there, we sailed to Tubuai and on to Tahiti from where we could finally fly to Europe and Canada. Back in Port Phaeton where "Jonathan" had been at anchor while we were away we did the prep for the 4500Nm or so to Bahia Cook close to Cape Horn. Sailing south to get in the westerlies we stopped in Raivavea again and later in Rapa Iti. Mid October 2022, we sailed for Patagonia. Although we did get our share of Southern Ocean weather, we entered Bahia Cook after an uneventful 24 days at sea. Just before a 4 day period of real Cape Horn weather that would have made entry difficult. We are now in Puerto Williams, Chile ready for the upcoming Expeditions to Antarctica in 2022/2023.
Proudly powered by Weebly